Take down Bosses with your friends to earn Experience, Cash, and Gamer Points. Sometimes you'll even get a drop of a new or limited availability item!

Bosses are locked until you have completed certain achievements. Once you have challenged a Boss you have a limited amount of time to fight them before they retreat and you lose your chance to get their kill rewards.

These threatening figures or creatures are never gone for long and can be fought repeatedly for additional rewards and achievements. Every time a defeated Boss returns, they are even stronger than before!

To access the Bosses on Mobile, select “Fight Bosses” Banner on the Home Screen. 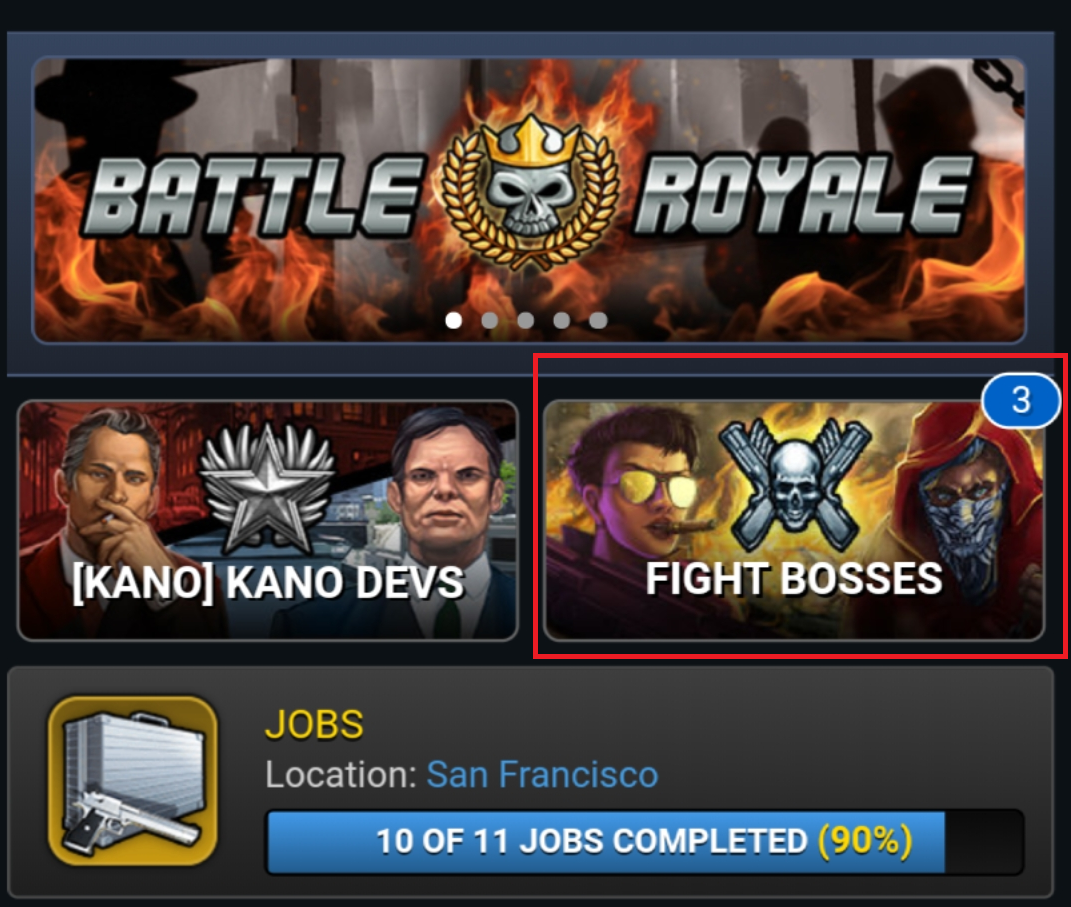 Cooperative (Co-op) Bosses
Each location has a unique Co-op Boss which you can invite your friends and fellow mobsters to help you out with.

While only one of your Co-op Bosses can be challenged at a time, there is no limit on the number of other people’s Bosses you can help with. In addition to earning you experience, helping with another friend's Boss can yield rare item drops that don’t appear anywhere else in the game.


Note that once you start a co-op boss, it'll be available for attacks for four days (96) hours. Once it is defeated, you will have 48 hours to claim any rewards before the boss expires for good.
World Bosses
Sometimes a massive World Boss will turn up. These juggernauts have incredible health reserves and require the efforts of many different players to take them down before they disappear with their loot.

Every player, regardless of level or allegiances, has the opportunity to join in these fights, and may launch an attack against a World Boss once every four hours. World Bosses will go critical if they are not defeated before the countdown reaches under 24 hours, and can then be attacked every 30 minutes.

Once a World Boss has been defeated you have seven days to collect your reward, so remember to check your Boss page regularly for updates!
Raid Bosses
If you like Boss Battles, then get ready for the main event! Every so often, a wickedly challenging Raid Boss will turn up, and players will have to pool their cunning, resources, and power to defeat them.

After the Party Leader summons a Raid Boss using collected Keys, or by using a Raid Pass (20 Favor Points) they must assemble a Raid Boss Party to help defeat their mighty foe. When a player attacks a Raid Boss, retaliatory damage is taken by the entire party—and look out, because Raid Bosses hit back hard! But worry not, because players can Heal the entire Raid Party by spending Energy, meaning that the battles become a fine balance between dealing damage and healing the party.

Your Party cannot die when party health is reduced to 0, but you will gain less experience per hit. Ensure your party is healed frequently to acquire the maximum Experience!

Raid Bosses give out great Experience rewards as well as exclusive Common and Superior item drops, so they're a great opportunity for players to earn Experience as well as acquire some awesome new items. The first time you summon a Raid Boss that season, you’ll be guaranteed a Superior item drop upon completion of that Raid Boss. While the other party members have a variable chance of receiving an item drop after the Raid Boss has been dispatched if they meet the minimum action requirements of 2000 total actions (of which at least 1000 must be healing actions). In any Raid, the player with the top amount of actions will also be guaranteed a superior item drop.
Power Attacks
You can spend extra stamina to do Power Attacks against a Boss which does more damage and earns more rewards than regular attacks. The slider now goes up to 100 Stamina! Beware that an attack of this level will mean your party will also take a big hit!

Adding more friends to your Fight will allow you to upgrade your Power Attack to inflict even more damage!