What is Battle Royale? 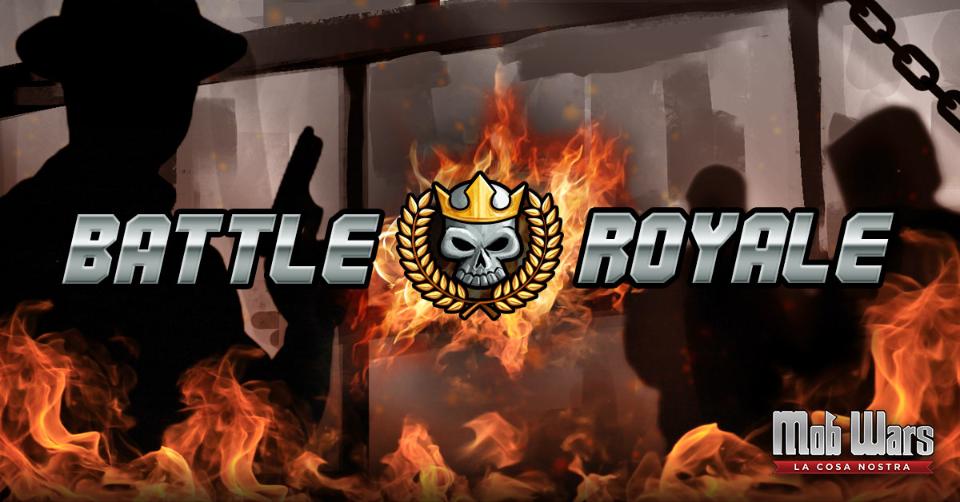 Battle Royale is a fast paced and real-time multiplayer battle that doesn’t stop until the last player is left standing. In this feature players compete against one another to earn XP, Loot Cases, and a bonus Battle Royale item for snagging first place. Each Battle Royale match is a stand-alone competition, meaning your character's Attack, Defense, and Health statistics do not influence your abilities in Battle Royale.

New Battle Royale matches are starting every few minutes. Head to the Battle Royale page to join in on the action! Click the JOIN MATCH button and you'll be queued up for the next match. The countdown won't take long, so get ready!

There are several different game modes for Battle Royale. Make sure you're aware of the rules of the current version before you take the plunge on Kano's most frantic, fight-filled feature! You can find descriptions of game modes HERE.

You can click on the attack button next to each combatant in order to make an attack. If another player has attacked you recently, you'll see a Rival icon appear next to their listing– this means whenever you attack someone else, they'll see an icon next to you too! Of course, if you don't attack anyone, you won't be safe either. Players who haven't made any recent attacks will start to see their health rapidly drained by poison! Cowards don't last long in Battle Royale

If you manage to score the killing blow on an opponent you'll see a congratulatory message replace their listing!

On the right-hand side of the Battle Royale screen, you'll see three boxes representing the Experience you've won so far in the match; your Health; and your Vitality.

Your health indicates how much damage you can take in Battle Royale. Once your health reaches zero, you'll be eliminated from the match. If your health is getting low, you can use a Med Kit to fully heal. You'll start each match with a limited amount of Med Kits, and may gain a few during the match, but be forewarned! You'll want to use them sparingly and effectively.

Vitality is used every time you take an action in Battle Royale. One attack will cost you one vitality point, while running away will often cost you more Vitality. If you have 0 Vitality, you won't be able to attack or run away! You start with Vitality Boosts to use when you're running low, but be careful not to use them all too early. 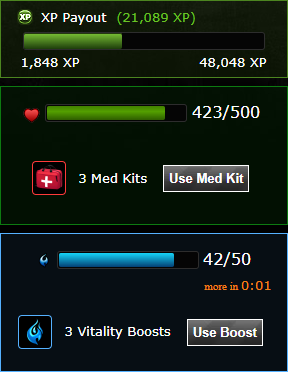 By clicking "Runaway" you'll expend some Vitality, but you'll be totally invulnerable for a short period of time. After your evasion timer ends, your Runaway ability will be on cooldown, and you'll need to wait a few minutes before running away again!

Once you're eliminated, you'll see how you did in the match, including your placement, number of kills, number of Pinatas killed, and the options to move onto the next match, or keep watching to see who emerged victorious! 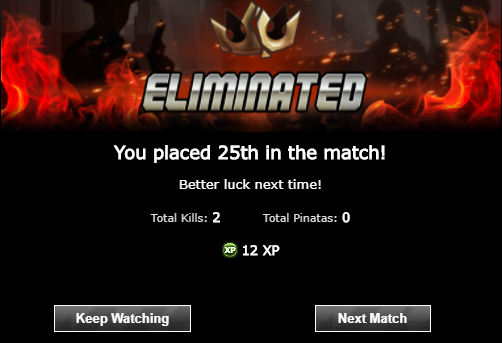 Battle Royale Inventory Items
Throughout the match you might receive items to help you out. You can see these at the bottom in your inventory. On the left-hand side you'll see your available weapons, while on the right-hand side you'll see your available armor. Click on any item to equip it! You can only have one item of each type equipped at a time.

As you use each equipped item, the durability will reduce. Once an item reaches 0% durability it becomes useless! Make sure you click another piece of equipment to swap it out. You'll start to see cracks on the item to give you warning that it may be time to switch things up!

In the middle is your current vehicle. These are equipped automatically, and the better vehicle you have, the longer you'll be able to evade players for.

Good luck in Battle Royale, Mobsters! If you have more questions about Battle Royale, check out our other FAQ articles on the feature or contact the Kano Player Success team!